Office of the Dean
Bauer College of Business 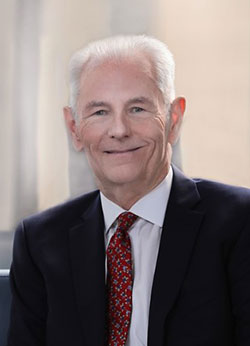 He has over 40 years of experience successfully creating, restructuring and leading client focused organizations, having held executive level positions as Division President/CEO, Senior VP, COO, Group Vice-President and Area Vice-President, for Pepsi Cola in Spain, Mexico, Western Europe, South America, Canada and the U.S. He also served as President and General Manager of Dell Computers in Brazil. Dr. Lawrence returned to the U. S., founding and operating a successful wine importing business for 10 years. He worked for UT school of Public Health and most recently he worked as Executive Director for a non-profit organization in the public health sector.

He was appointed to his current position with the UH SBDC Network on September 1, 2017. The UH SBDC Network is comprised of 13 centers located throughout the 32-county region surrounding the Houston metropolitan area, with a focus on economic impact such job creation, business starts and expansions, and capital access for their clients.

Steve also serves on the Association of Small Business Develop Centers (ASBDC) Board of Directors and is a member of the ASBDC Accreditation Committee, who are responsible for doing inspections and accreditation of the 62 SBDC's across the US and its territories.